KRU Championship league kicked off with an unpredicted outcome when only one host won as two-time Kenya Cup champion Mean Machine kicked off on a 27-20 losing note at home while fellow varsity side USIU-A was defeated 17-15 by visiting pirates.

The most recently relegated sides from the Kenya Cup league registered mixed results when Western Bulls shut newly promoted Kabarak University 29-0 while Kisumu fell 13-23 to nationwide champions and newly promoted Shamas Foundation who kicked off their campaign on the winning lane.

Western Bulls took command of the new standing's courtesy of a fiery thriller, while Shamas foundation was placed second and followed closely in third by Catholic Monks.

The two hosts were not spared the upsets as last season semifinals Northern Suburbs lost by a point to University of Eldoret who won by three penalties while Egerton University conceded three tries and a conversion against Eldoret RFC in a match they could not score a point at their own
backyard to lose 17-0. 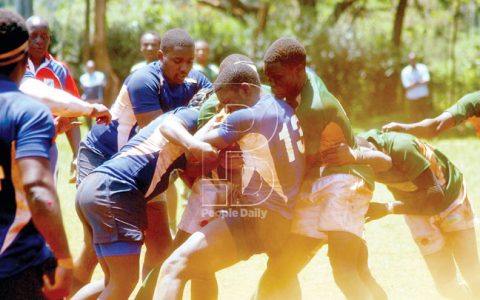