The Kenya Ferry Services Managing director Bakari Gowa has been summoned by the Directorate of Criminal Investigations (DCI) to record a statement in relation to the ferry accident that lead  the death of Mariam Kighenda and her four-year-old daughter Amanda.

Mombasa DCI Anthony Muriithi said investigations had started to establish the cause of the accident.

Likoni sub-county police commander Benjamin Rotich, told People Daily that the ferry boss is set to appear before a multi-agency investigations team for statements to establish what may have caused the September 29 accident.

“We are still planning on when he is to appear before us and record statements. We are yet to set a day since we are still consulting with relevant government agencies. However, if need be, he will be summoned by detectives to shed more light on the ferry accident,” said Rotich yesterday.

But Gowa said he was yet to receive official communication requiring him to record a statement.

“I have not yet be summoned but I welcome the move to investigate the tragic accident. If the police are planning to question me, I am ready. I will cooperate if I am summoned,” he said.

Gowa has been under pressure to resign following the accident.

In a phone interview with People Daily, Rotich revealed that so far, five officials of the Kenya Ferry Services (KFS) who were on duty on the day when Kighenda’s car rolled off the Mv Harambee while in the Likoni channel had already recorded statements.

“Investigations are on. Five people have already been questioned and recorded statements. Among them are the coxswain of MV Harambee, private guards and the duty engineer on the day the accident happened,” he said.

Rotich said the bodies of the victims would undergo postmortem tomorrow at the Coast General Hospital before they are handed over to the family for burial.

A group of MPs led by Likoni MP Mishi Mboko have asked KFS and Kenya Coast Guard (KCG) officials to take responsibility for the accident.

The legislator blamed the deaths of Kighenda and Amanda on incompetence of the two government agencies.

And in a press release, KFS said plans were underway to deliver a new ferry MV Safari next year, as part of an ongoing programme to replace old ferries within the next five years.

“To improve services at the Likoni and Mtongwe channels, plans are underway for the construction of a cable car in the next three years, construction of Dongo Kundu bypass and enforcement of on board regulations to enhance safety and security of commuters among others measures,” read the statement. 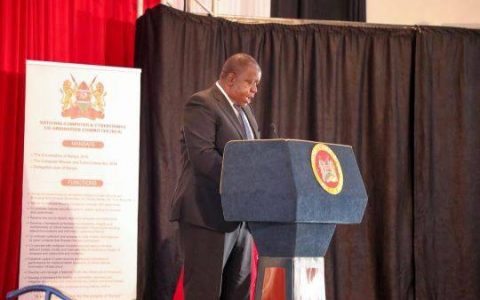 It’s impossible for Kinoti to continue serving as DCI – Sifuna